High-impact clusters of events in the USA in 2021: Leading Demand Indicators as of July 5 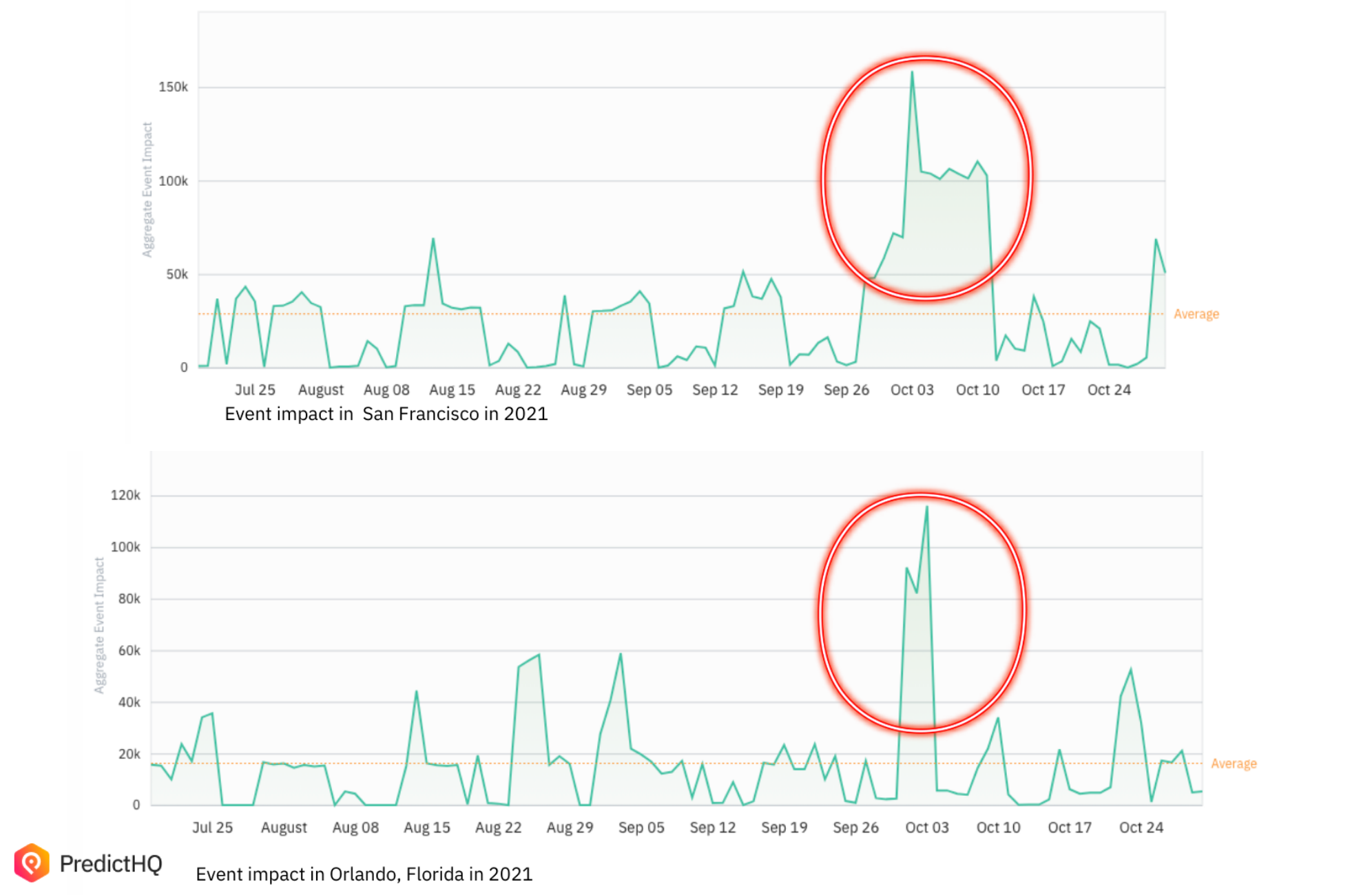 We are all looking forward to not having to think or talk about the pandemic anymore. And we’re edging closer: restrictions have lifted, large events are returning rapidly and companies are transitioning from simply staying alive to recovery strategies. As we look ahead at what will drive demand in the next six to 12 months, we want to call out an unprecedented but positive impact of the pandemic on upcoming demand patterns.

This is the high rate of large and mid-sized events that have been shifted to the second half of 2021 and in 2022, mostly rescheduled or postponed from 2020 and the first half of 2021. This concentration is creating clusters of events that will drive major impact, so businesses that are properly prepared can have boom days or weeks. Yet is impossible to detect without extensive data coverage and an understanding of the predicted attendance. Comprehensive coverage and intelligent event data  is why PredictHQ exists, today we want to highlight some of the bigger clusters, which we will call “perfect storms of demand”. We have chosen threes cities at different stages of event recovery, as these clusters are appearing all over the USA.

There are many ways to work with demand intelligence data, such as by category, location or the size of the event. Below we have focused on three cities at different stages of event recovery. If you are interested in a city not featured, any of the clusters not explained in this report or in a particular kind of event, get in touch with our team to receive customized insight.

For example, expos are a major driver of business travel, and demand for our airline, transport and accommodation customers, all of whom are keeping a close eye on our data for states like Texas, which is expecting 267% more attendees at expos compared to the same period in 2019.

Orlando is a particularly interesting city for demand forecasters at the moment. Not only was Florida one of the earlier states to relax pandemic restrictions, it’s also the beneficiary of some major event relocation.

For example, these large events have been moved to Orlando:

Orlando is not  a huge city, with a population of less than 300,000. This means events can send forecasts off the charts if they’re not factored in. Over the coming months, here is the aggregate impact of events:

There are multiple event-driven perfect storms of demand coming up in Orlando. The largest takes place around October 7 and into the weekend ending October 10, when 12 impactful events collide including:

There are also some overlapping, longer term events that impact people movement. The University of Central Florida for instance is in Fall Session with around 34,000 students on campus (find out more about how academic events impact demand).

Click here to login to PredictHQ and see every event in detail (with location, predicted attendance, impact rankings and more). Don’t have a PredictHQ account yet? Get in touch with our team.

Chicago has been rebounding swiftly and is frequently one of the busiest cities scheduling new events (more on this further in the report).

Here’s Chicago’s upcoming event-driven impact. As you can see, there are major surges throughout the year.

We want to focus on the most immediate: a surge of 51 events in late July that will gather 135,000 people across multiple events. Yes, it looks small compared to what else is coming in Chicago this year, but we want to break it down to show how significant even a smaller perfect storm of demand can be.

The impactful events include:

Longer term impactful events include The Grant Park Music Festival in Central Chicago that runs for 10 weeks with a predicted total attendance of 120,000

Click here to login to PredictHQ and see every event in detail (location, predicted attendance, impact rankings and more).

San Francisco from September 21 to October 12: event impact up by 351%

Tell me you didn’t look at this and go “Ah, Dreamforce, right? Happening in late September” and the answer is yes but also no. Dreamforce is on September 21 to 23 this year. That’s only the beginning of that major event impact surge in October - and not its peak on October 3.

Before we dive into the events making up this surge, a reminder it’s important to closely monitor events during these chaotic pandemic times, and especially in major Californian cities such asSan Francisco, as the state is actively considering measures to revitalize its re-awakening event economy. The following is accurate as of early July, but PredictHQ’s systems are re-verifying all event data multiple times an hour to ensure accuracy in these dynamic times (more on our data quality approach).

So, Dreamforce gets this perfect storm pumping, but what are some of the other 136 events making up this demand surge? These include many sold out shows rescheduled from 2020 and earlier this year at the Chase Center. Some the high impact events include:

Click here to login to PredictHQ and see every event in detail (location, predicted attendance, impact rankings and more).

As regular readers already know, these fortnightly reports share the rate of new or rescheduled events locking in dates and locations each week. While we focused the above report on the multi-billion dollar trend of event clusters in late 2021 and into 2022, here’s a quick recap of activity in June 2021, when event rescheduling rose by 35% compared to May 2021’s rate.

One of the biggest trends to watch is the states and cities coming off a lower base such as New York and California where events are surging back.

As the event recovery continues, demand anomalies for businesses that aren’t real-world aware will increase in both volume and severity. PredictHQ is supplying our customers with impactful events across the world, both verified and standardized, from 19 categories in one API.

To find out how leading companies such as Uber, Domino’s and major hotel chains are using this data, explore our use cases.

We publish fortnightly editions of this Leading Demand Indicators report. Sign up to receive it in your inbox early each week.

Matthew Hicks
Director of Data Assurance
Passionate about quality. Ensures constant improvements to the quality and coverage of data to deliver the best possible value to our customers.