Events across the USA in 2021: Leading Demand Indicators May 3 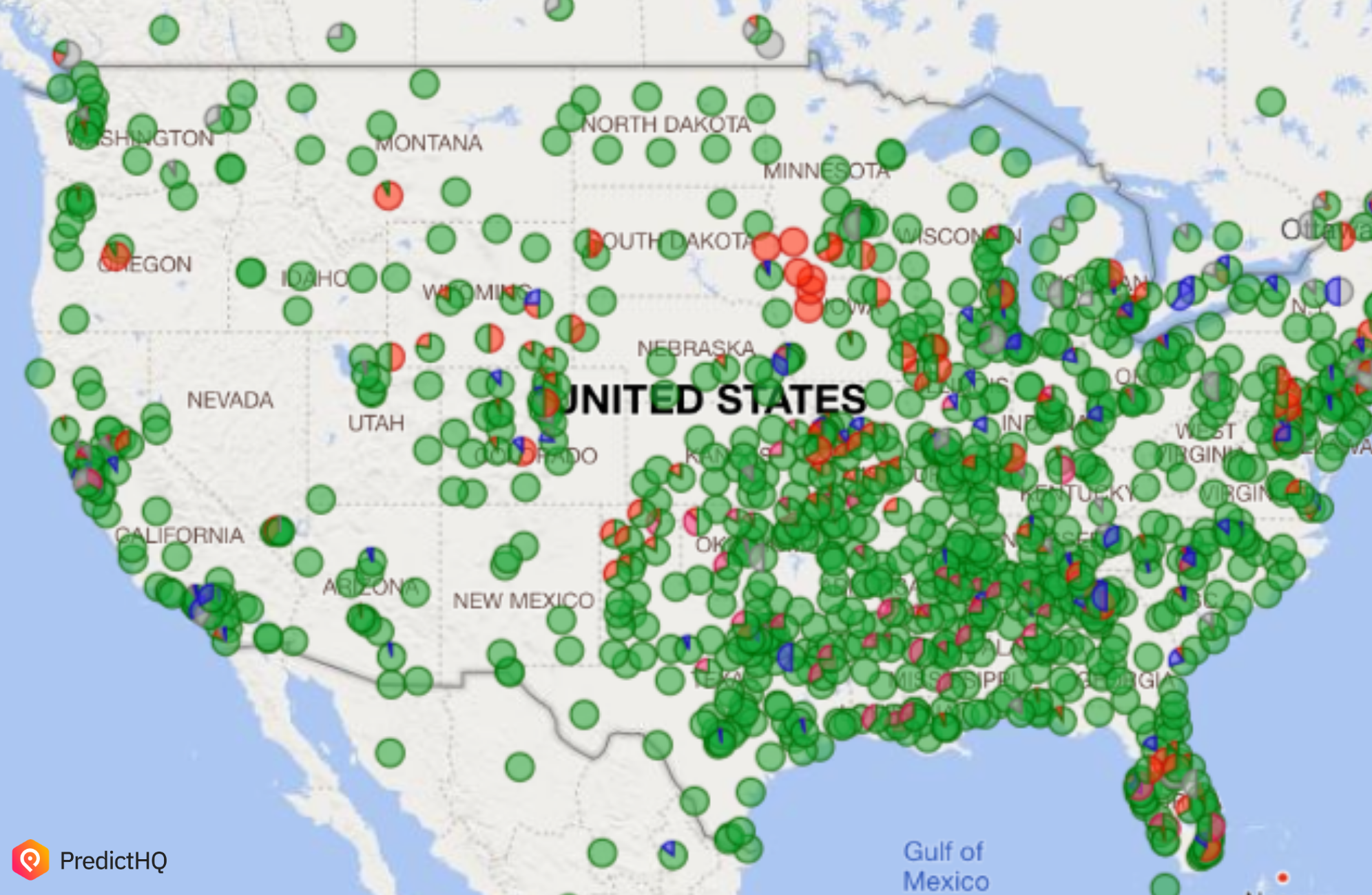 With April behind us and the USA heading towards a likely sharp rise in large event scheduling in quarter three as many states lift all restrictions, this week’s report reviews event scheduling across the USA for the month of April as well as detailing a sudden surge in sports events that has knocked Las Vegas and New York City out of the top spots for America's fastest event-scheduling cities list.

The USA is at the beginning of a dynamic and fragmented economic recovery. Different states, cities and even counties and stores will recover at different rates. Events are major drivers of demand, especially for retail, food retail, transport and travel companies (accommodation and airlines).

PredictHQ tracks, verifies and predicts the impact of the world's events, which means we can see how much cities and towns differ. For example, here are the aggregate event impact graphs for Los Angeles and Chicago. (Please note both cities will change significantly week-on-week as more events are scheduled.)

Los Angeles is so far experiencing a steady return of events, with two major events of more than 100,000 people taking place within a few weeks of each other in early to mid-September. These include:

But city recoveries vary. Using Los Angeles as your guide for major cities would leave you flat-footed in say, Chicago, where your operations have less time to prepare (such as re-onboarding staff and increasing their inventory) for some event-driven surges, with major events returning in June, such as the Taste of Omaha festival at Elmwood Park from June 4 to June 6 which is expecting 125,000 people. Chicago announced significant easing of restrictions last week, so we are anticipating more larger events being scheduled within the next month based on what we are seeing in other major cities.

Since we began publishing this weekly event recovery report, Las Vegas has been the busiest city by far. The Las Vegas recovery was mostly driven by the return of performing arts events as the restrictions on venues continue to ease.  Both this and last week, we saw New York City follow suit with easing restrictions driving a sharp increase in performing arts events such as comedy shows, launching it to the second busiest city in April 25’s Leading Demand Indicators report.  This week, New York clocks in at 22nd and Las Vegas at 12th as a major surge of attended events across the USA disrupted the previous rankings of cities significantly.  This week the new events are mostly sport games, especially Minor League Baseball but also football games in September.

It’s important to understand that the graph below is about the volume of events, rather than impact (such as the graphs USA, Los Angeles and Chicago specific graphs above), which factors in each event’s predicted attendance. Sports tend to be substantially larger than performing arts events, but even within sports, events can range from a couple of hundred people to hundreds of thousands of people, especially as more sports venues announce a return to 100% capacity.

Understanding the impact of each event on your demand is critical to using demand intelligence effectively in your planning and this is why we work with customers to understand the relationship between events and their demand, utilizing PredictHQ's seven years of verified historical event data.

The pattern of returning events has been consistent throughout the month of April. Sports and concerts continue to be the most frequently scheduled, as are community events which tend to be smaller and scheduled with shorter lead times - hence why they appear to drop off throughout the year.

The below graph is for the month of April, but reasonably similar in breakdown to the weekly graphs we have shared in earlier reports (see April 25, April 19 and April 12). It is worth noting that average predicted attendance continues to rise in most states for many event types, and particularly for sports events.

Festivals are a high impact event type, as they occur across multiple days and can command crowds of hundreds of thousands. There are more than 11,500 festivals scheduled throughout the USA in 2021 already.

We are expecting to see the festival rescheduling rate, as well as the return of many postponed festivals in the second half of 2021 as restrictions ease.

Some of the higher impact festivals already scheduled include:

New events scheduled across the USA in April 2021

This report outlines the general trajectory and trends of event recovery across the United States. To make the most of events in your forecasting, you will need to use programmatic solutions given what dynamic and large datasets event data can be.

PredictHQ is supplying our customers with impactful events across the world, both verified and standardized, from 19 categories via a RESTful API. To find out how leading companies such as Uber, Domino’s and major hotel chains are using this data, explore our use cases.

Talk to an Expert Learn how demand intelligence can improve your forecasting efforts Get in touch
Matthew Hicks
Director of Data Assurance
Passionate about quality. Ensures constant improvements to the quality and coverage of data to deliver the best possible value to our customers.

Event rescheduling across the USA increased by 54% this week. New York City events are surging back, making it the second busiest city…
More

Concerts and sports in particular are being scheduled across the USA, and Las Vegas remains the country's busiest city for event scheduling.…
More

Events drive demand, and large attended events are being scheduled all over the USA. This weekly report details the rate of bookings…
More
ESC