Upcoming events in the United Kingdom in 2021: Leading Demand Indicators as of May 2021 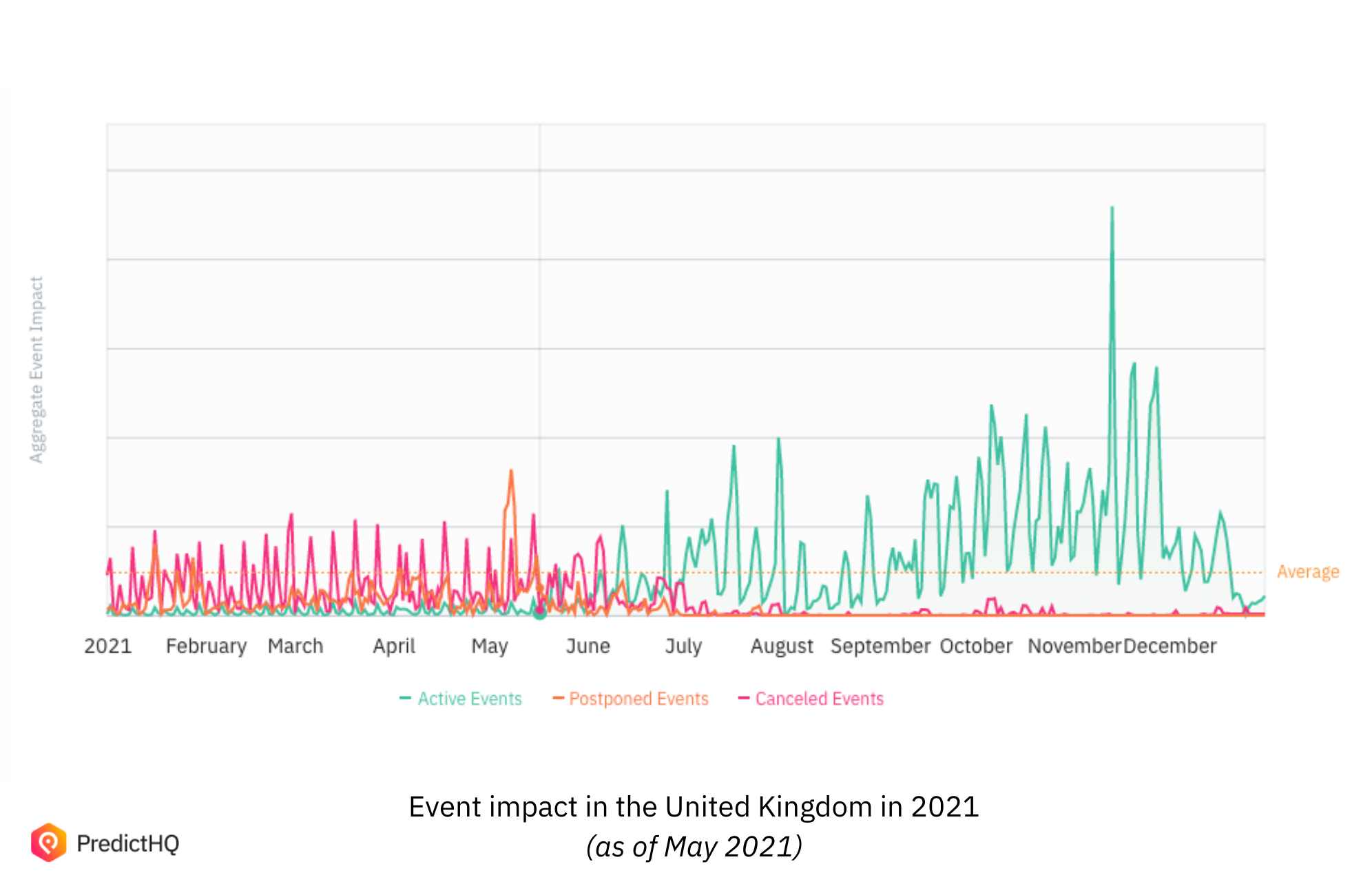 Welcome to our first report on the recovery of events in the United Kingdom. Events drive demand for business, especially some of the industries worst hit by the pandemic and lockdowns: restaurants, bars and pubs, transport, accommodation and retail.

PredictHQ tracks the world’s events across 19 categories. In these monthly reports, we will outline how seven attended event categories are returning, including what kind of events and key areas of interest. The attended events we will focus on are:

The UK is just at the beginning of its event recovery. More than 10,000 events are scheduled in England, Wales, Scotland and Northern Ireland in the next few months, with 24% expecting more than 1,000 attendees.

What kind of events are returning?

The below graph is of events our systems identified in mid April to mid May, that have been scheduled for 2021 in the UK. It is important to note each of the four countries that make up the UK have different restrictions, which will impact events.

Performing arts and concerts so far are returning at the highest volume in aggregate, although this is not uniform across every city (more information in the next graph). Based on how events have recovered in other countries as vaccination rates rise and restrictions ease, it is likely we will see sports and community events returning rapidly in the coming months.

We anticipate an increase in events as restrictions ease on May 17 in England as sports venues, theaters, concert halls and conference centers re-open.

In mid-May, Wales announced a trial of nine sports and community events allowed to have a set number of spectators and participants. These events included:

Which are the busiest cities for event scheduling?

Unsurprisingly, Britain’s largest city is scheduling events more quickly than others by a substantial margin. This has been a consistent pattern throughout the past six months.

What is more interesting is the kinds of events that cities are scheduling. For example, Manchester has more expos and festivals than other cities, while the event recovery in Castlereagh is primarily sports events so far.

Coming up in the next four to six weeks are more than a thousand large events. These need to be in your demand forecasts to ensure you are ready to meet demand, rather than watch customers head to your better prepared competitors.

Upcoming events in the United Kingdom at a glance

Below is our aggregate event impact graph for each of the four countries within the UK. This graph shows the combined impact of events in the UK for 2021. As you can see, we are at the beginning of a turning point for events being rescheduled, while cancellations and postponements drop off but the pattern is not uniform across the UK.

This report outlines the general trajectory and trends of event recovery across the United Kingdom. To make the most of events in your forecasting, you will need to use programmatic solutions given what dynamic and large datasets event data can be.

PredictHQ is supplying our customers with impactful events across the world, both verified and standardized, from 19 categories in one API. To find out how leading companies such as Uber, Domino’s, and major hotel chains are using this data, explore our use cases.

We will be releasing monthly editions of this Leading Demand Indicators report. Sign up to receive it in your inbox as soon as it’s published.