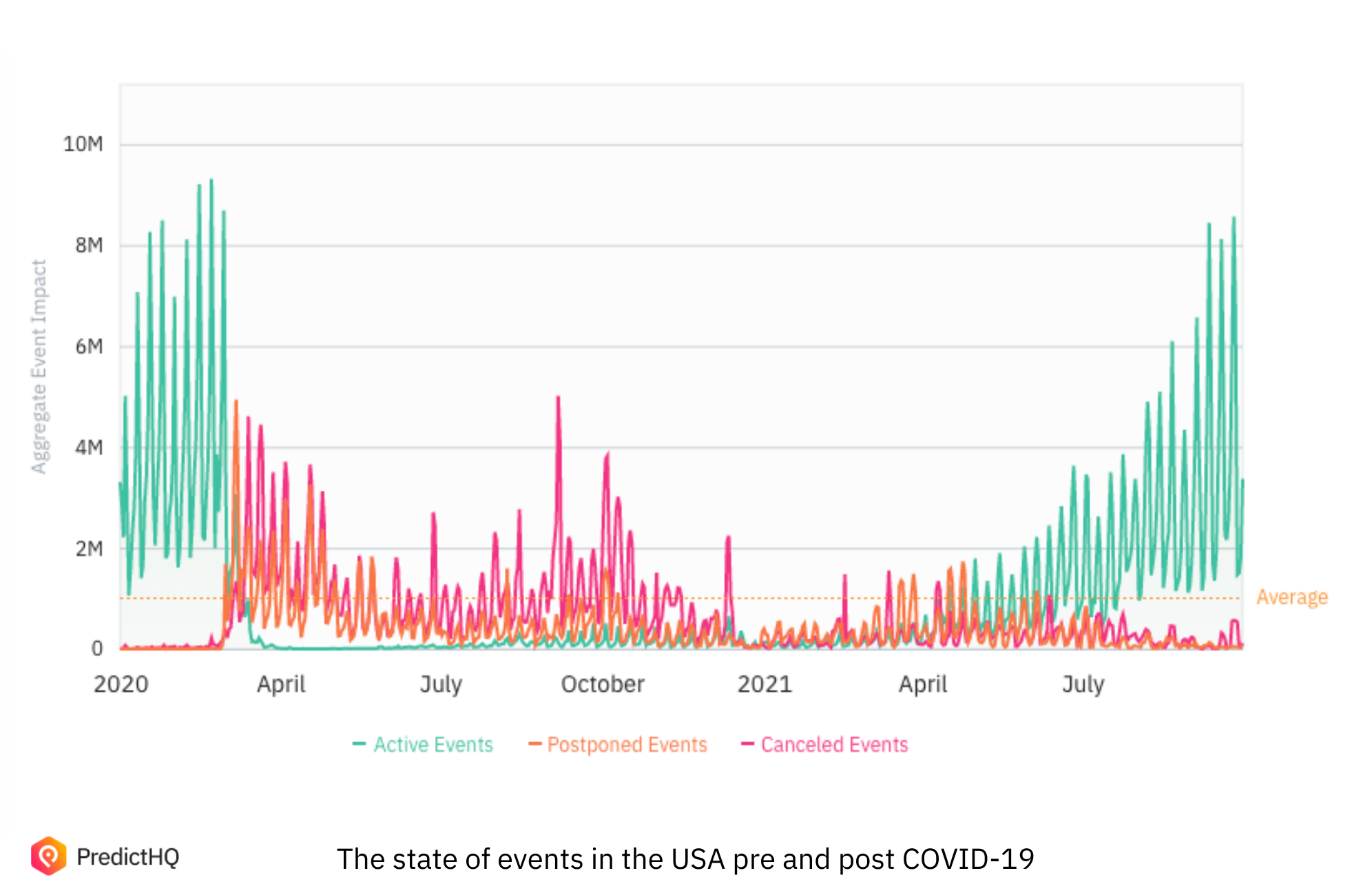 As the USA eases into its new normal, it can be easy to forget this time last year and realise how much has changed, and how rapid this pace of change is. Events across the US were almost completely wiped out, and with it billions of dollars in demand for businesses from accommodation to retail to transport and event businesses themselves. Below is a graph of the event attendees at all events  from the last two and a half years:

Yep, mid 2020 was pretty grim, but what’s more interesting is how swiftly impactful events are returning at scale, especially as postponed events (the orange line in the graph below) from both 2020 and earlier 2021 are being locked in for the end of this year. Here’s a more detailed look at the event impact from January 2020 through to later this year.

But both rescheduled events and the pent-up demand caused by this event lull are already roaring back. For a great overview of the return of events, see this Recode article we contributed data and insight to.

At PredictHQ, our job is to build systems that track, verify and enrich events across 19 categories (with more coming soon). We work closely with our customers, and it’s fair to say the rapid return of events has taken even those of us tracking it closely by surprise. But this is very much a good surprise, after 18 months or so defined by bad surprises.

Which events are returning the fastest?

Each week, we share a graph of the events scheduled in the preceding seven days by category. This week, it looks similar to how it has since May – dominated by concerts. There were more concerts than most other categories of events in pre-pandemic time, as our systems track everything from small gigs at the corner bar through to major concerts that sell out stadiums night after night.

Today, I want to explore that thin slate blue line in each of these, because therein lies one of the most impactful events for business: expos.

Expos have never been one of the categories with the most events. Expos tend to be large, with at least several hundred attendees and often thousands or tens of thousands. They play an essential role in commerce, connecting businesses to each other and their customers.

As soon as restrictions began easing, our team began fielding questions about their rate of return. These came mostly from our accommodation, airline and transport customers, but also from retail and food retail customers that had stores set up near key expo and associated accommodation locations.

A good way to understand the return of events is to compare the total predicted attendance of an event category in 2021, compared to 2019. PredictHQ uses a unique model to accurately predict the attendance of each event, which enables us to provide this analysis.

Comparing predicted attendance rather than the actual volume of events is important because there are already many large events are clustered in the second half of 2021, as many have been rescheduled from earlier this year.

Using this process and adding up all the attendees expected at expos in 2021 compared to 2019 for the same period, 2021 is on track to see more demand generated by expos than the pre-pandemic year:

Here is a heat map of expos from July to October 2021:

Some notable upcoming expos include:

These events have enormous economic impact. In June alone, expos and conferences will generate at least $206 million of demand for businesses nearby.

The cities scheduling events the fastest this week

Las Vegas was the busiest city in May when we launched these reports, but its announcement that it was lifting all restrictions from June 10 has seen an explosion of events in the entertainment capital.

So significant is this surge it has knocked the far more populous state and previous chart-topping state, California, out of lead spot for the busiest state this week.

Performing arts continues to be one of the most frequently scheduled events, as these range from a few hundred people gathering to watch a show up to tens of thousands.

As the event recovery continues, demand anomalies for businesses that aren’t real-world aware will increase in both volume and severity. PredictHQ is supplying our customers with impactful events across the world, both verified and standardized, from 19 categories in one API. To find out how leading companies such as Uber, Domino’s and major hotel chains are using this data, explore our use cases.

Matthew Hicks
Director of Data Assurance
Passionate about quality. Ensures constant improvements to the quality and coverage of data to deliver the best possible value to our customers.

Upcoming Events in the USA in 2021: Leading Demand Indicators June 7

Like much of the pandemic economic recovery, the event recovery is fragmented. Discover which states and cities are scheduling events…
More

Upcoming events in the USA in 2021: Leading Demand Indicators for June 2

Events continue to return as companies in the know prepare for clusters of large rescheduled events. This week, we dive into festivals,…
More

Upcoming events in the USA in 2021: Leading Demand Indicators for May 24

Events are recovering swiftly. This month’s total event booking volume has soared by 207%. Plus how events in NYC, Los Angeles, Las…
More
ESC