Upcoming events in the USA in 2021: Leading Demand Indicators report for May 17 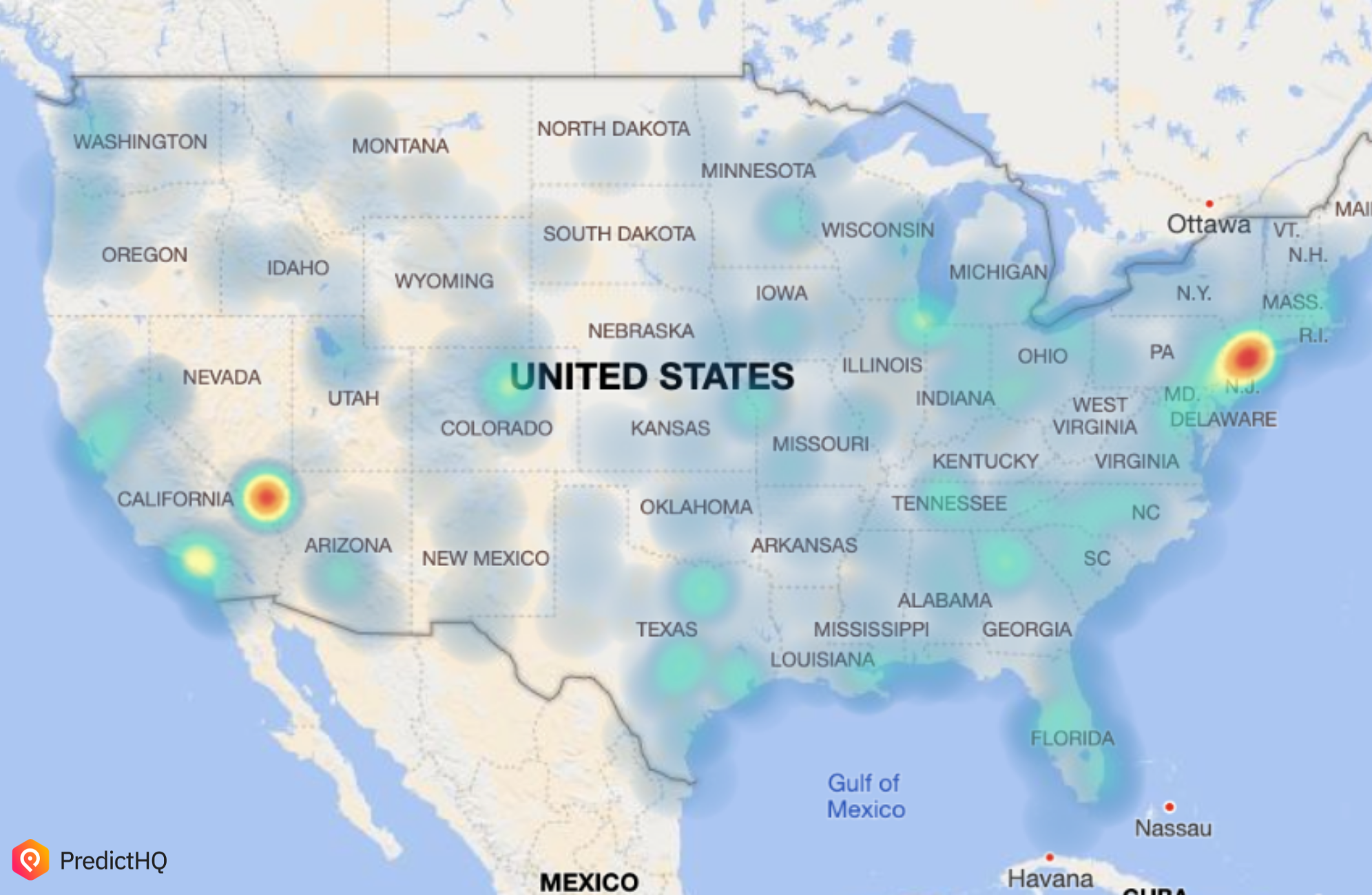 The economic recovery and the recovery of events have been underway for a couple of months now, but in May we’ve seen it really start to skyrocket as event organizers and cities prepare for a major lifting of COVID-19 restrictions across many states, which kicks off this week.

A pattern we have seen across the USA is as restrictions ease, event size and the volume of events being scheduled leaps up. Our machine learning models are always working, finding and verifying new events (and checking for changes and updates to existing events in our system). We are also running regular quality checks to ensure we’re getting every new event in some of the states set to fully reopen (with guidelines on a state-by-state level) soon such as:

As the economic recovery continues across the USA, demand intelligent companies are tracking large events so they can prepare for the peak days many companies will miss until they have lines out the door, are out-of-stock and have nowhere near enough staff ready to meet demand. Knowing in advance about impactful events enables our customers to make their forecasts to be real-world aware and reduce forecast error, saving millions.

Performing arts events such as comedy shows and plays rarely fill stadiums like concerts, sports and festivals can. But they are significant drivers of demand for restaurants and bars around the venue, as well as transport providers.

Because these events are smaller, and their attendance varies so widely, they are one of PredictHQ’s most interesting event categories for restaurants and quick service companies, as our models look after identifying and verifying events, as well as predicting the attendance of each event for you.

Major changes to the most active cities this week: Las Vegas is no longer on the list and NYC is at the very top for the first time

For the six weeks PredictHQ has been publishing these reports, Las Vegas had been the busiest city – scheduling more new events each week than any other city. This week, Las Vegas is not even in the top 25, and the extent of New York City’s event scheduling spree makes even busy cities such as Jacksonville and El Paso look quiet.

In this fragmented and dynamic recovery, cities and even suburbs within each city are recovering at different rates.

This week, we want to share more information on how five major cities are recovering, to provide some more specific insight per city. Our team would love to help you find out more about each city if you have operations there. Most of our customers are national (and international), so being able to use features such as searching for events in a radius around each store, property or hotspot location is a valuable tool.

Below are graphs of five cities across the USA. The main graph is of the number of events being booked in each city. To put this in context, we have also added an Aggregate Event Impact graph inset into each. This inset shows the combined impact of events booked on a location, factoring in predicted attendance.

Upcoming events and scheduling rates in Chicago in 2021

Notable events coming up soon in Chicago include:

Upcoming events and scheduling rates in New York City in 2021

Notable events coming up soon in New York City include:

Upcoming events and scheduling rates in Denver, Colorado in 2021

Notable events coming up soon in Denver include:

Upcoming events and scheduling rates in Minneapolis in 2021

Notable events coming up soon in Minneapolis include:

Upcoming events and scheduling rates in Boston in 2021

Notable events coming up soon in Boston include:

This report outlines the general trajectory and trends of event recovery across the United States. To make the most of events in your forecasting, you will need to use programmatic solutions given what dynamic and large datasets event data can be.

PredictHQ is supplying our customers with impactful events across the world, both verified and standardized, from 19 categories in one API. To find out how leading companies such as Uber, Domino’s, and major hotel chains are using this data, explore our use cases.

Talk to an Expert Learn how demand intelligence can improve your forecasting efforts Get in touch
Matthew Hicks
Director of Data Assurance
Passionate about quality. Ensures constant improvements to the quality and coverage of data to deliver the best possible value to our customers.

Upcoming events in the USA in 2021: Leading Demand Indicators for May 10

PredictHQ'S Weekly Upcoming Events in the USA report. This week: event scheduling is up 93% month-on-month; Events from September 2021…
More

Event rescheduling across the USA increased by 54% this week. New York City events are surging back, making it the second busiest city…
More

Concerts and sports in particular are being scheduled across the USA, and Las Vegas remains the country's busiest city for event scheduling.…
More
ESC