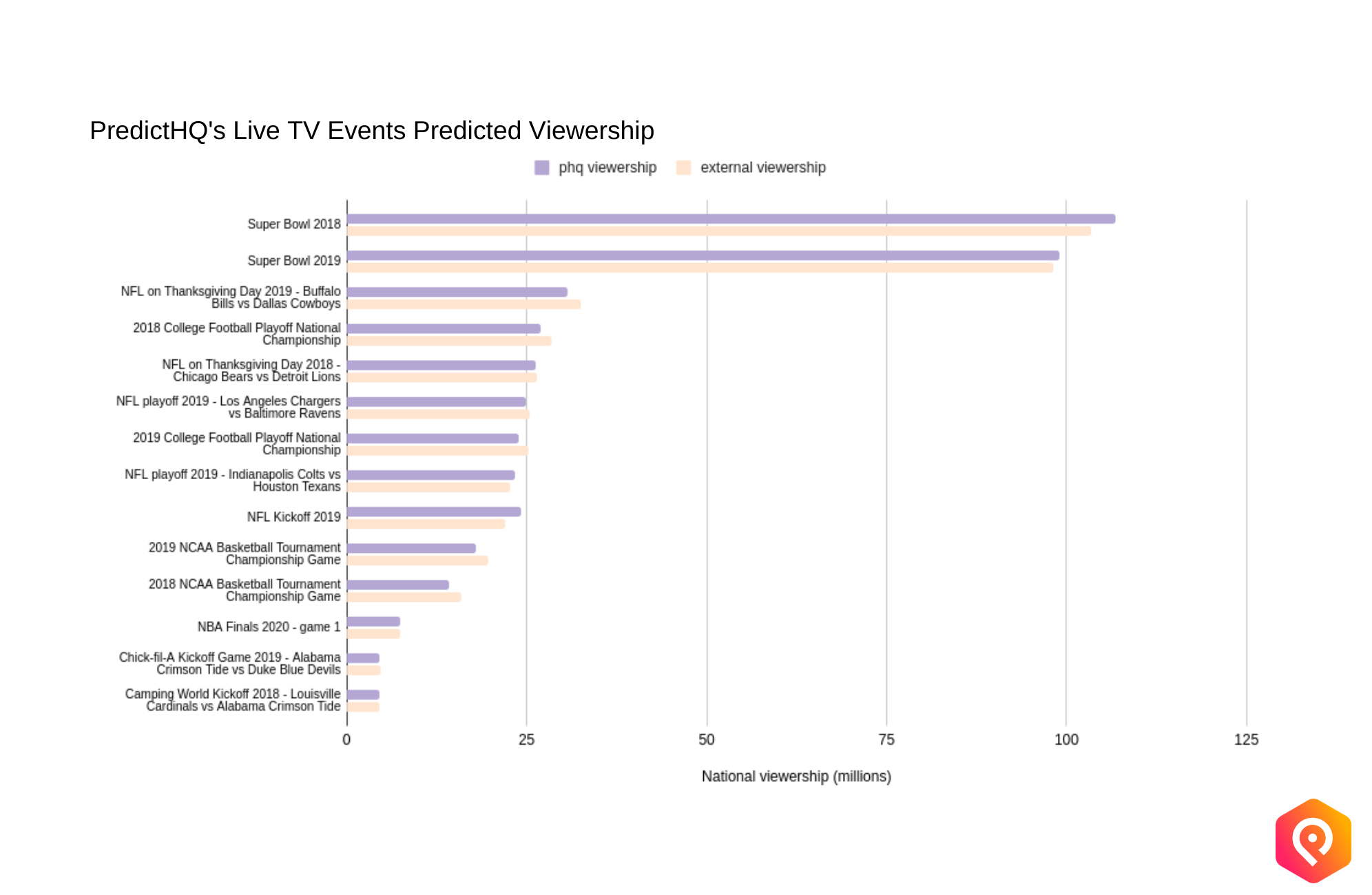 PredictHQ’s new feature Live TV Events accurately predicts the viewership for major televised sports games across seven leagues so companies can forecast how these games will drive purchases such as food, beverage, delivered food, and retail decisions. It’s a radically new kind of demand intelligence. Although it’s only available in an exclusive beta at the moment, we are getting so much inbound interest we have decided to share some more information on how it works.

Why does understanding the impact of predicting viewership matter?

Live broadcast sports events have significant impact on restaurants, retail, delivery, as well as food and beverage providers. Recently conducted research about the impact of sports on buying behaviors this year revealed:

As the stay-at-home economy becomes more important, tracking the exact impact of sports games on demand gives companies an advantage by ensuring they have the right amount of inventory and staff ready to meet demand without excessive wastage.

Previously, pinpointing the impact of a particular game or even a cluster of games on your demand was challenging. Many of our customers, especially our large quick-serve retailers have been trying to grapple with this for years. The existing options for TV viewership are only available after the game and organized in designated marketing areas, making it not usable in demand forecasting models. Our data science team architected this from scratch, to provide accurate predicted viewership with county-by-county granularity to be used in demand forecasting, inventory management and staffing decisions.

How does PredictHQ know the predictions are accurate?

This is the million dollar question for every prediction, so we wanted to address this first thing. The image at the top of this post shows how our predictions stack up against post-game data from other providers.

We look at two main factors:

Tracking both elements is critical to creating forecast-grade data. Accurate predictions that don’t relate to customer transactional data would indicate that we weren’t identifying relevant information for smarter demand forecasting, which is what our demand intelligence is all about.

At this stage, we have focused on predicting the viewership for live broadcasts of seven sports leagues:

We will continue to expand our sports coverage in the US and into Europe, as well as explore other key television events over the coming months and into 2021. While we can’t share all of our methodology publicly, we have covered some of the most asked questions below.

What factors impact the viewership of a game?

Our model uses more than 20 distinct features to pinpoint the expected viewership of a game. Throughout our early testing and beta with a handful of major customers, we were able to identify some significant impacts. These include:

These are only some of the high impact features, which are focused only on the game-by-game level. But as any sports fan knows, sports games aren’t broadcast into a vacuum. Games airing at the same time or even on the same day or weekend will impact viewership considerably as well:

How does PredictHQ predict TV viewership?

Predicting TV viewership was a unique technical challenge. No other company does it, and it was further complicated by the imprecise nature of TV viewership measurement. Other players in the market use historical figures that are estimated based on a sample of viewership.

Originally we attempted to build our model based on previous external TV viewership data, but found that impossible for a number of reasons. This upended our original plan to build a series of supervised machine learning models. We instead built our models using a customized version of a probability framework our Chief Data Officer, Dr Xuxu Wang developed. This was a highly novel way of predicting viewership.

Our Live TV viewership prediction model is based on a unique probability framework. We leverage our entities and knowledge graph to determine viewership estimates by county. Here’s a quick overview of the model:

Whatever model we developed, we knew it would rely heavily on our entities system. PredictHQ doesn’t just track events such as concerts, expos and severe weather. We also track venues, sports teams, performers and much more. This is critical insight into an event’s predicted attendance. For example, the Spark Arena in Auckland, New Zealand hosts both Beyonce (who sells out the seats) as well as many local bands (which do not).

We have more than 55 million entities in our system and have been tracking many for years. One of our starting assumptions that proved accurate was higher performing teams draw larger audiences to the stands prior to the pandemic, and they would also draw more TV viewers. That’s just one of the elements our model factors in.

Overall, our data science team has found this to be a daunting and fascinating challenge. Seeing data scientists from our  customer base introduce Live TV Events data into their models and see substantial reductions in forecastinr errors worth hundreds of millions of dollars has made it all the more satisfying.

If you would like to try the data out yourself or have more questions, get in touch with us here. This data is featurized and can be introduced into your fforecasting models as easily as any of our other event categories.

Talk to an Expert Learn how demand intelligence can improve your forecasting efforts Get in touch
Dr. Xuxu Wang
Chief Data Officer
Passionate about using data, algorithms and building intelligence to make an influence on the world. Lover of hiking, history and food.