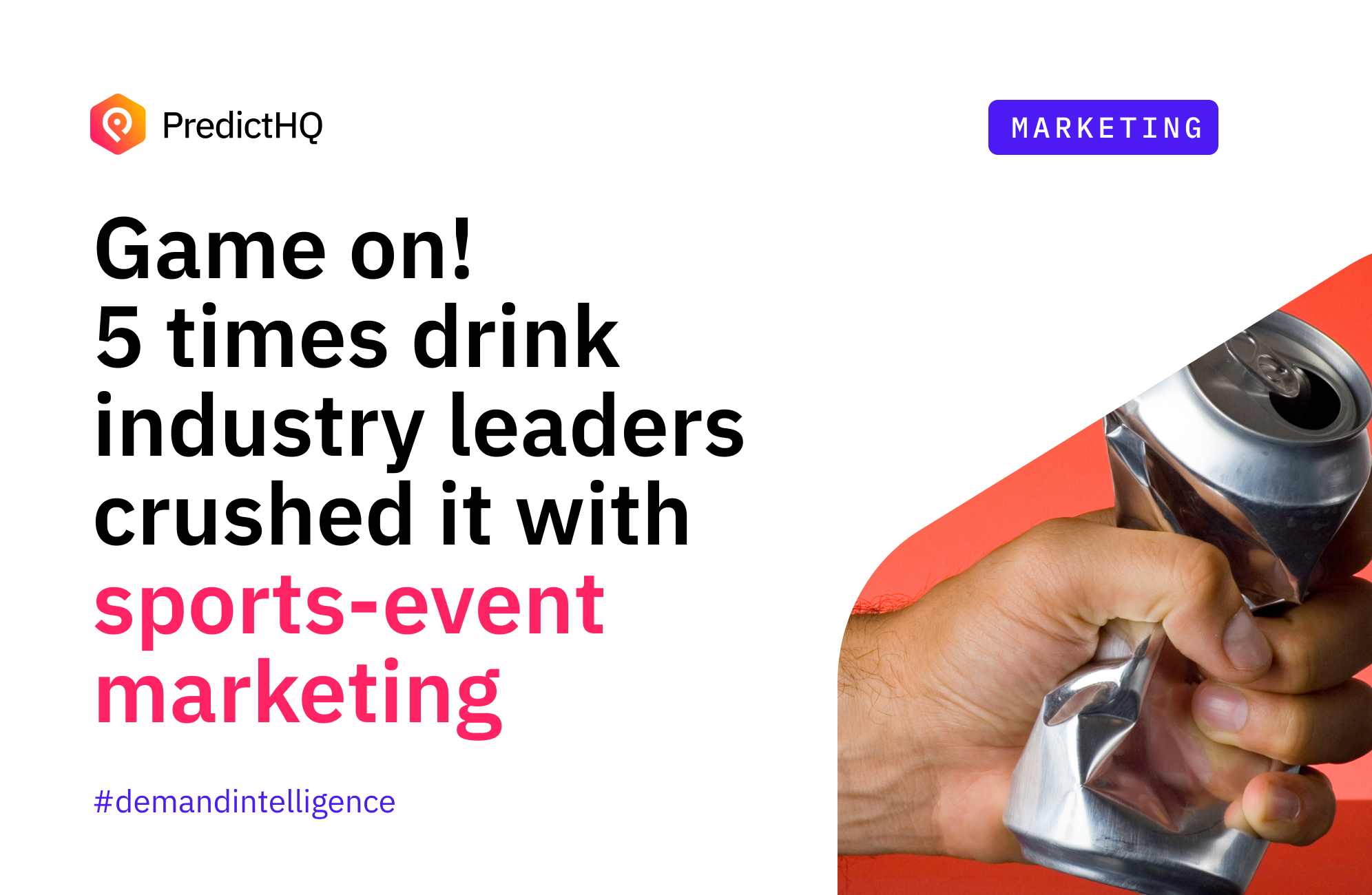 Local and televised sports events often attract a large and engaged audience for fast-moving consumer goods (FMCG) companies such as drink manufacturers to market their products to – which can be especially effective if the event aligns with your target market. Major sports events often create a sense of community and camaraderie among viewers, which can be leveraged by these companies to create a positive association with their brand.

Whether it's the Super Bowl, World Series, Olympics, or World Cup, these events attract a large and engaged audience, making them the perfect opportunity for drink manufacturers to market their products and boost sales. But it's not just about being there, it's about how you leverage the occasion and make it memorable for the audience.

Event-based marketing is not a new tactic. CPGs have targeted consumers around specific events or occasions for years, and has been proven to be an effective way for beer, soda, sports drink companies and snack companies to increase brand awareness, sales, and revenue. Sports events also generate a high volume of social media and media attention, which can amplify the reach and impact of a marketing campaign.

In general, sports events are an opportunity for these companies to increase sales by targeting consumers who are interested in the event, and looking for products to enjoy while watching or participating in the event. Leaders in the drink industry allocate resources to sports-based marketing because it:

Let’s explore five examples of leaders in the beverage industry that have successfully leveraged sports-event based marketing tactics in recent years, and how they did it. From Bud Light's Always Save the Beers campaign to Coca-Cola's World Cup activation, these examples will show you how to score big with sports-event marketing.

This spontaneous campaign was a result of fast thinking on the part of Bud Light social media marketers in 2019 during Game 5 of the MLB World Series, when Houston Astros' Yordan Alvarez happened to hit a 2-home run during the second inning. The ball went flying out into the stands where it met Washington Nationals fan Jeff Adams standing there with his hands full, each firmly grasping a can of Bud Light.

Rather than block the approaching ball with either arm, Jeff opted to take a flying baseball to the chest in order to preserve his two Bud Light beers, which sparked the inception of this sports event-based marketing campaign.

Video of the incident quickly went viral on social media, where fans called for Adams to receive free beer for life as a reward for his dedication to the brand – to which the brand agreed within one minute. In fact, Bud Light took full advantage of the wacky, yet somehow relatable moment captured on camera, using it to engage their social media following to ask for help finding Jeff. Once Bud Light's social team located the lucky fan, they offered him:

By participating in the fun of the game along with fans and building on an organic moment for the Bud Light brand, the company turned the 4-second viral video clip into a gold mine of press coverage. This demonstrated the brand's authenticity and ability to quickly capitalize on a real-life moment and turn it into a successful advertising and PR campaign around a sports event.

Coca-Cola is a master of marketing for sports events – in fact, they’ve had stadium advertising at every FIFA World Cup since 1950. The company has run campaigns featuring soccer-themed packaging and promotions around these events in order to create a positive association between Coca-Cola and soccer, and to drive sales and revenue by targeting consumers who are interested in the sport.

One example of Coca-Cola's occasion-based marketing for soccer events is the company's "Together" campaign, which was launched for the 2018 FIFA World Cup. Its goal was to create a positive, upbeat atmosphere around the event and to encourage people to come together and celebrate the World Cup. The campaign included limited edition soccer-themed packaging featuring eight designs to represent Japan, Portugal, Spain, Argentina, Brazil, France, Germany, and Russia:

The campaign also included chances for fans to win exclusive, event-themed merchandise from various retailers, and a sweepstakes to win a trip to Russia to watch a live match. The official Coca-Cola anthem for the 2018 FIFA World Cup titled Colors, performed by Jason Derulo, served as a fitting backdrop for the entire campaign.

Red Bull energy drink is easily the most visible sponsor for several extreme sports events, with its history of sponsoring sports events dating back to the early 1990s. These events help convey the idea that Red Bull empowers consumers to push beyond their limits – reinforced by the famous “Red Bull gives you wings” slogan. Over the past three decades, Red Bull has increased brand awareness, solidified its brand identity, and boosted sales by not only sponsoring, but hosting a wide variety of sports events, such as:

Red Bull Stratos was a high altitude skydiving project in 2012 where Austrian skydiver Felix Baumgartner jumped from the stratosphere, on the way down officially becoming the first human being to break the sound barrier and the first person to reach supersonic speed without traveling in a jet or a spacecraft.

In addition to breaking world records, the successful mission gained a significant amount of attention from around the world, reportedly generating nearly $160M worth of ad spend. More than 8 million people watched the event on YouTube via Live Video Stream, and it was covered by over 40 TV stations and 130 digital outlets.

The campaign also generated a strong response on social media, with Red Bull's Facebook post of Felix Baumgartner receiving over 216,000 likes, 10,000 comments, and 30,000 shares within just 40 minutes. The success of the campaign demonstrates the company's ability to use event-based marketing to create experiential exposure for its brand, and to effectively use social media to engage with its audience.

While Red Bull also sponsors traditional sports events such as soccer and Formula 1 racing, extreme sports events are well known for their high level of intensity and excitement, and they typically attract a large number of spectators and media attention. Red Bull has leveraged occasion-based marketing to promote its signature energy drink around these high-impact events, including running advertisements and promotions featuring top athletes.

PepsiCo's Refresh Your Game was a 360-degree campaign for Super Bowl LIII in 2019, complete with an official halftime show, NFL Rookie of the Year announcement, local promotions, giveaways, and more. As the official sponsor of the event for that year, Pepsi was sure to mark its territory throughout the event’s host city Atlanta – which happens to be the home of Coca-Cola headquarters.

Refresh Your Game was an in-your-face campaign with funny, confrontational messaging challenging Coke and reminding everyone in town that Pepsi is the official sponsor of the Super Bowl. The campaign took over the city with 250+ print ads plastered around the heart of Atlanta.

Besides doing a metaphorical victory dance on their rival’s turf, the advertisements focused on the theme of refreshing your game, or the idea that PepsiCo's sports drinks help athletes perform at their best, and makes watching the game that much more enjoyable for fans.

The goal of the campaign was to continue to reinforce the positive association between PepsiCo's sports drinks and major sporting events, and to drive sales and revenue by targeting thirsty fans and athletes who are looking for a way to stay hydrated and energized during and after sporting events.

In January 2023, Heineken USA plans to release their newest addition to the market, Heineken Silver, a premium light beer with low calories and carbohydrates. Clocking in at 95 calories, 3.2 grams of carbs, and 4% alcohol by volume, the launch of Heineken Silver will help to position the brand in the increasingly popular premium light lager category.

To promote the debut of Heineken Silver, which was initially released in Europe in 2022, Heineken is partnering with Live Nation Entertainment and the Las Vegas Convention and Visitors Authority to host the world's most prestigious motor racing competition, Formula 1.

Lighting up the Vegas strip on November 16-18, 2023, the official Formula 1 Heineken Silver Las Vegas Grand Prix will take place at night in the heart of the city. The 3.8-mile track will speed past world-famous landmarks including casinos, hotels, and more as drivers push their luck to the limit at speeds of up to 212 mph.

Heineken has promoted responsible drinking with the help of high-profile motorsport partnerships since becoming a global partner of Formula 1 in 2016. Since then, the brand has leveraged the prestige of F1 to create a sense of exclusivity and luxury associated with the Heineken brand.

As a global partner, Heineken has a strong presence at Formula 1 events around the world. In addition to providing refreshments at Formula 1 events, Heineken also produces content to showcase its partnership with Formula 1, such as TV commercials and social media campaigns. Heineken also sponsors several teams and drivers, including Scuderia Ferrari. Heineken has been associated with Ferrari for many years and has been the official beer partner of the team since 2016.

These examples represent a small fraction of the thousands of sports events taking place globally each year, which you can use to connect your brand with sports.

Whether you’re a small or large CPG, you can leverage intelligent event data to identify the events that have historically impacted your demand the most, and create marketing strategies to partner with or sponsor these events in the future. Drill down into granular, location-based event data for visibility into all events of interest in different markets, so you can allocate your event-based marketing spend to reach markets you have yet to tap into.

Reach out to learn more about how to track sports events impacting demand for your products. You can also test our data for free for 14 days to identify impactful local and televised sports to target your marketing efforts around.

When it comes to consumer packaged goods (CPG), sports events can be a goldmine for sales. In this article, we'll explore how sports…
More