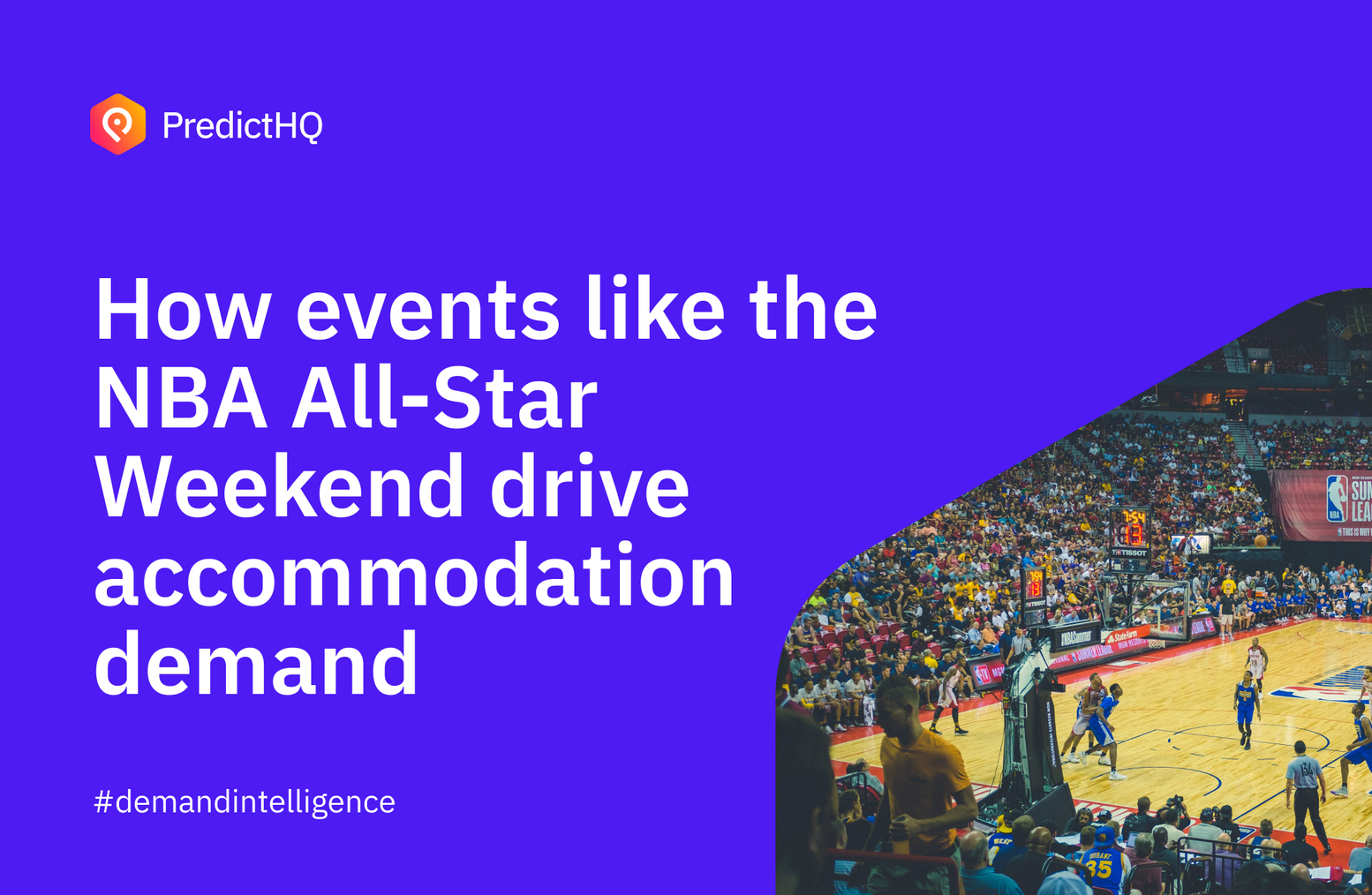 Sports events can be major drivers of accommodation and hotel demand as they bring a high volume of people to specific locations to watch – even in the midst of a global pandemic. Especially high-profile events such as the NBA All-Star Game, which showcases 24 of the league's star players picked by the media, fans, and players.

It’s the highlight of NBA All-Star Weekend, an annual event hosted by a different city each February from Friday through Sunday. Let’s explore how this event boosts accommodation demand in its host cities – in this case, even when people are explicitly told not to come to town.

2021 was an interesting year for the NBA All-Star weekend due to COVID. Despite the Atlanta mayor urging sports fans to stay home and watch the game on TV, thousands descended on the city to party ahead of the official festivities – most of which were canceled, except for a handful of events that were moved to Sunday, along with the All-Star Game itself.

Accommodation demand impact doesn’t typically land on the very day of the event. This time, local hotels saw a spike on Saturday when people were checking into hotels, before guests went on to attend events the following day.

The All-Star Game was not ticketed due to the pandemic, but 1200-1500 guests attended on an invite-only basis. What we found is that hotels near Atlanta’s State Farm Arena saw demand increases of 140-160% from baseline on the Saturday of the NBA All-Star Weekend in 2021.

Hotels closer to the venue generally showed a larger spike compared to baseline, but a cluster of hotels farther from the venue but surrounding the nearby airport (Hartsfield-Jackson Atlanta International Airport) also saw a spike in demand, up to 70% above baseline.

This finding about increases in demand for the hotels around the airport indicates accommodation providers shouldn’t only be considering events close to hotels, but the larger surrounding area. For example, airport hotels which may serve the local area, but also the nearest city’s major events.

In 2019, the event took place at Spectrum Center in Charlotte, North Carolina, bringing over $100M to the region. That year, Charlotte created its own demand surge by hosting a “basketball trifecta” of events held within weeks of one another: NBA All-Star Weekend, CIAA Tournament, and the 2019 New York Life ACC Tournament. Together, these events drove $167 million in economic impact to the region, including $93.5 million in direct visitor spending, due in part to demand for 32,000 rooms across 30 hotels (source).

The 2022 NBA All-Star Game took place in Cleveland, Ohio, attracting 150,000 attendees from 45 states and 24 countries who brought nearly $250M to the city’s economy (Source). In 2023, the event is heading to Vivint Arena in Salt Lake City, Utah for the first time in 29 years. Next up in 2024 is Gainbridge Fieldhouse in Indianapolis, Indiana which is already anticipated to have an economic impact of close to $250M, including $141M in direct spending (Source).

Do you have hotels located in either of these locations? Or are you a travel business or Destination Marketing Organization that could take advantage of these upcoming surges in demand? It’s not too early to start optimizing your staff availability, pricing, and packaging to maximize revenue not just for high-profile events – but also for events such as conferences and expos that are perhaps lesser-known, yet still drive major accommodation demand. Explore how one leading accommodation chain uses event data in their forecasting to save $90 million a year – and you can too.

Go beyond trends – know which events are your demand catalysts

While it’s a simple concept that events drive demand as they typically attract large groups of people together, thousands of events are happening around the world every day – making it incredibly hard to track events at scale. Not only that, but tracking and understanding the details about events in an accurate way is even harder, as seen in the example above.

One of the most powerful business lessons learned from the pandemic was that relying on historical data for forecasting and pricing was far too risky. It’s never been more important to know about demand-driving events, but tracking these manually is time-consuming and error-prone – especially the hundreds of thousands of recurring events that change date and location each time.

PredictHQ is a demand intelligence company that enables you to easily track and understand events at scale so you can focus on driving up RevPAR and accurate staffing. Our systems aggregate and verify events from hundreds of sources.

We then rank the events by impact and provide a predicted attendance number using our proprietary models, so you know the most relevant events to optimize for. There are a variety of ways to consume our data but we recommend starting with Location Insights – a tool that lets you input your own locations to track events around these locations to better understand local event impact.

With reliable visibility into location-based event data, parking operators such as SpotHero and ParkMobile know about demand-impacting…
More

Use events to tap into the return of travel demand